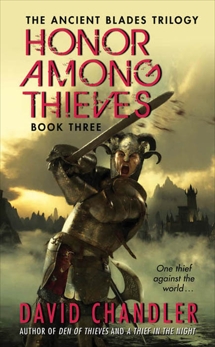 Honor Among Thieves: Book Three of the Ancient Blades Trilogy

Synopsis: When it comes to epic fantasy, David Chandler’s breathtaking trilogy, The Ancient Blades, steals the show! Honor Among Thieves, the concluding volume in the fantastic adventures of young cutpurse Malden in and beyond the treacherous City of Ness, honors a glorious fantasy tradition while offering a fresh take on loyalty, love, magic, friendship, and duty.  In this final chapter, Malden, having failed to protect a kingdom despite wielding one of seven Ancient Blades, must employ trickery and cunning to survive rampaging barbarian hordes and former friends alike. With his magnificent Ancient Blades novels—Den of Thieves, A Thief in the Night, and now Honor Among Thieves—David Chandler has boldly established himself as a major new voice in fantasy fiction, spinning gritty tales of intrigue, knights and bandits, witches and warriors, demons and monsters, as adroitly as Brent Weeks, Scott Lynch, Joe Ambercrombie, R. A. Salvatore, and possibly even challenging the throne of George R. R. Martin himself.