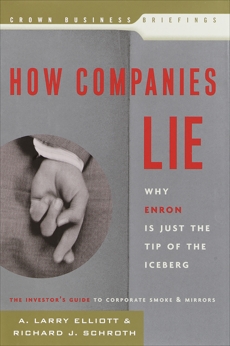 Synopsis: The questions investors need to ask . . . The answers corporate America must give about the true facts of corporate performance and value.

During the 2001 baseball season, when games were played at Enron Field in Houston, a typical reaction was: “What the hell is Enron and what do they do?” Now we know more about the executives and inner workings of today’s best-known rogue company than we ever imagined. But it turns out that Enron is just the most egregious case of a disturbing trend and the seemingly unstoppable tendency of some capitalists to destroy capitalism. Something like 50 percent of American households directly support the markets by investing in stocks and mutual funds. But some of the people entrusted with the responsibility for maintaining and managing the corporation—senior executives, boards of directors, auditing firms—have become engaged in what can only be called economic terrorism.

Enron, Sunbeam, Global Crossing, and Waste Management are but the tip of the iceberg. Luckily, there are ways for investors to spot corporate smoke and mirrors and challenge the players. Larry Elliott and Richard Schroth show investors the questions that need to be asked to get a handle on the performance reality of companies. The corporate world, in turn, needs a return to reality and authenticity in business operations, finance, accounting, and deal making. This need for performance reality is not an issue confined to a few companies who engage in unethical and illegal behavior. The technological pace of change, along with increasingly complicated business transactions, makes global markets more and more complex. The assumption, however, has always been that we have the management competence and rigor to ensure shareholder value. Enron is definitive proof that the way companies are run—the gap between what they say is reality and what is really the case—is frightening. And this gap has severe implications for millions of people who are employees of and investors in these companies.

Using Enron as the touchstone, Larry Elliott and Richard Schroth show investors how to think about and measure the candor of corporations, the Wall Street players, and their supporters.