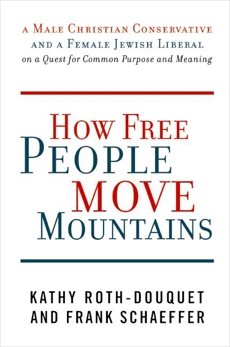 How Free People Move Mountains: A Male Christian Conservative and a Female Jewish Liberal on a Quest for Common Purpose and Meaning

"How Do We Ever Speak with One Voice Again in Our Divided and Angry Country?"

It is amazing how one America is isolated from the "other" America. The red/blue state divisions run so deep that it is possible to live without any interaction—ideological or otherwise—with those who hold different opinions than oneself. We are a people alienated, from ourselves and from our government.

The authors, an odd mix across the Blue/Red divide—one a founder of the modern evangelical movement, the other a liberal Jewish former Clinton aide—hold an extended conversation across many months, several states, and two countries—sometimes contentious, sometimes funny, exploring the idea of how unlikely pairings—and thus, the entire country—can come together. They argue that we're entering a new era in history, and now is the time to rise up to it; to make ourselves able to tackle the enormous problems in our laps; to, in effect, move mountains.