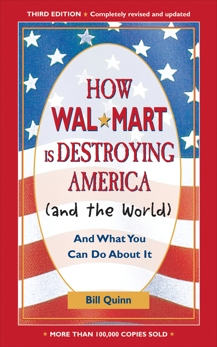 How Walmart Is Destroying America (And the World): And What You Can Do about It

Synopsis: After carving up the once lovingly cared-for downtowns of Small Town America, Wal-Mart launched a frontal assault on mom-and-pop businesses all over the globe. With 1.5 million employees operating more than 3,500 stores, Wal-Mart is now the world's largest private employer. In this third edition of How Wal-Mart Is Destroying America (and the World), intrepid Texas newspaperman Bill Quinn continues the fight. Featuring detailed accounts of Wal-Mart's questionable business practices and the latest information on Wal-Mart lawsuits, vendor issues, and efforts to stop expansion, Quinn shows why Wal-Mart Stores, Inc., is arguably the most feared and despised corporation in the world. Whether you're a customer fed up with Wal-Mart's false claims, a vendor squeezed by strong-arm tactics, a worker pushed to increase the Waltons' bottom line, or a concerned citizen trying to save your hometown, this book will show you how to get Wal-Mart off your back and out of your backyard.

BILL QUINN is a World War II veteran, retired newspaperman, and certified anti-Wal-Mart crusader. He lives with his wife, Lennie, in Grand Saline,Texas.