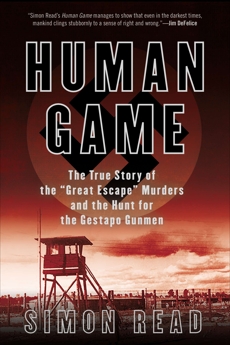 Synopsis: In March and April of 1944, Gestapo gunmen killed fifty POWs—a brutal act in defiance of international law and the Geneva Convention.

This is the true story of the men who hunted them down.

The mass breakout of seventy-six Allied airmen from the infamous Stalag Luft III became one of the greatest tales of World War II, immortalized in the film The Great Escape. But where Hollywood’s depiction fades to black, another incredible story begins . . .

Not long after the escape, fifty of the recaptured airmen were taken to desolate killing fields throughout Germany and shot on the direct orders of Hitler. When the nature of these killings came to light, Churchill’s government swore to pursue justice at any cost. A revolving team of military police, led by squadron leader Francis P. McKenna, was dispatched to Germany seventeen months after the killings to pick up a trail long gone cold.

Amid the chaos of postwar Germany, divided between American, British, French, and Russian occupiers, McKenna and his men brought twenty-one Gestapo killers to justice in a hunt that spanned three years and took them into the darkest realms of Nazi fanaticism.

In Human Game, Simon Read tells this harrowing story as never before. Beginning inside Stalag Luft III and the Nazi High Command, through the grueling three-year manhunt, and into the final close of the case more than two decades later, Read delivers a clear-eyed and meticulously researched account of this often-overlooked saga of hard-won justice.