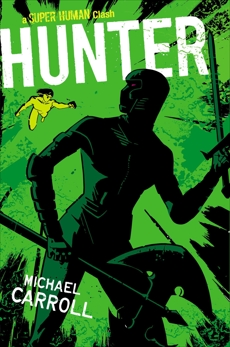 The defeat of the near-invincible villain Krodin has left a void in the superhuman hierarchy, a void that two opposing factors are trying to fill. The powerful telepath Max Dalton believes that the human race must be controlled and shepherded to a safe future, while his rival Casey Duval believes that strength can only be achieved through conflict.

Caught in the middle is Lance McKendrick, a teenager with no special powers, only his wits and the tricks of a con artist. But Lance has a mission of his own: Krodin’s ally, the violent and unpredictable supervillain Slaughter, murdered Lance’s family, and he intends to make her pay.

For fans of Steelheart and The Avengers, Hunter is an action-packed superhero story that is hard to put down.

“No one writes superheroes as good as Michael Carroll. With Hunter, Michael takes his flawed, all-too-human superheroes to the next level. One of my favorite series.”—Michael Scott, author of The Secrets of the Immortal Nicholas Flamel series

“[HUNTER] is fast paced, exciting, and extremely difficult to put down . . . its unexpected, jaw-dropping ending guarantees anticipation for the next entry."—VOYA

"A flurry of odd jobs (including time in a carnival), a brief romantic fling, and an intriguing epilogue make this appealing to all sorts of readers, and as always, Carroll delivers a super story."—Booklist