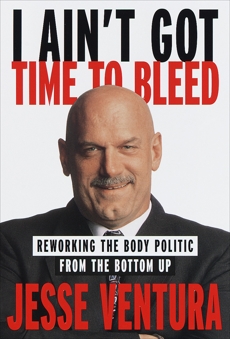 I Ain't Got Time to Bleed: Reworking the Body Politic from the Bottom Up

Synopsis: When he left the navy SEALs to become a pro wrestler, the fans knew him as "Jesse, the Body."

When he hosted his hard-hitting KFAN radio talk show, he became "Jesse, the Mouth."

In I Ain't Got Time to Bleed, Jesse Ventura reveals the secret of his landslide electoral success—with record voter turnout—and maps his innovative strategies for pioneering a new era in American government. In his own inimitable words, he takes on bloated government, career politicians, and apathetic voters, and tells the wildly colorful story of his days as a navy SEAL, his nights in the pro-wrestling ring, and his experiences on radio and in films like Predator and Batman and Robin .

I Ain't Got Time to Bleed is Rocky meets Mr. Smith Goes to Washington—a book that will challenge readers' ideas of traditional government as it introduces them to one of American politics' most ferocious new heroes.