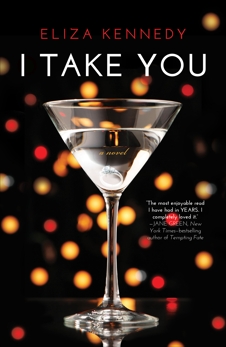 Brilliantly executed and endlessly funny, this page-turning debut showcases one of the most winning, irrepressible voices since Helen Fielding’s Bridget Jones.

Meet Lily Wilder: New Yorker, lawyer and the luckiest woman in the world. She has a dream job, friends who adore her, a family full of charismatic and loving women, and a total catch of a fiance. Also, she has no business getting married.

Lily’s fiance, Will, is a brilliant, handsome archaeologist. Lily is sassy, impulsive, fond of a good drink (or five) and completely incapable of being faithful to just one man. Lily likes Will, but does she love him? Will loves Lily, but does he really know her? As the wedding approaches, Lily’s nights—and mornings, and afternoons—of booze, laughter and questionable decisions become a growing reminder that the happiest day of her life might turn out to be her worst mistake yet.

Bridget Jones’s Diary meets Where’d You Go, Bernadette in this joyous and ribald debut that introduces a fabulously self-assured protagonist whose choices raise fresh questions about gender politics, monogamy and the true meaning of fidelity.

Praise for I Take You

“In the first big beach read of the season, New York lawyer and bride-to-be Lily Wilder has a hard time staying faithful to her perfect fiancé- but that won’t stop this hilarious debut novel from winning you over and warming your heart.”—Entertainment Weekly

"Lily Wilder is a young lawyer who compulsively drinks, swears and sleeps with random strangers-even as she prepares to wed her fiancé in just a few days. But she grows on you. This debut novel's take on modern gender roles is aggressively provocative, with graphic sex. It's also funny and, eventually, wise."—People

“[Kennedy's] snappy comedy of mis-manners delights in subverting expectation... I Take You, as salty-sweet as a margarita, will appeal to fans of Seating Arrangements, Where’d You Go, Bernadette, and, looking further back, Laurie Colwin’s Happy All the Time, though it’s far more ribald. Kennedy’s novel, tailored for summer wedding season, is a sassy paean to pleasure and romantic love that may well leave you singing that classic Gershwin line, ‘Better call the calling-off off.’” —Heller McAlpin, NPR.org

“Kennedy’s debut novel sparkles with candor and wit…[her] ribald story is both engaging and atypical, the perfect combination for a new voice in women’s fiction.”—Publisher’s Weekly

"In this whirlwind story, which reads not unlike a quickie engagement, the ultimate question is whether one can be both promiscuous and in love. Lily, basking in the glow of Key West's free-love attitude, is guided toward yes. This book has the effect of three Bloody Marys at brunch: it'll leave you flushed, giddy, and prepared to embrace your wild side."—Kirkus Reviews

“What appears at the outset to be standard chick-lit fare turns into a smart and challenging examination of gender politics and the meaning of marriage in the twenty-first century. While Kennedy’s compulsively readable debut is sure to be controversial, it should also ignite productive conversations about traditional gender roles and stereotypes.”—Booklist, starred review