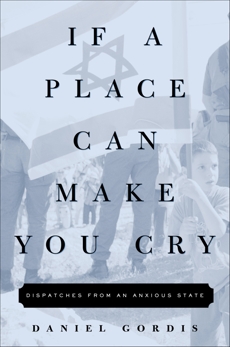 If a Place Can Make You Cry: Dispatches from an Anxious State

Synopsis: In the summer of 1998, Daniel Gordis and his family moved to Israel from Los Angeles. They planned to be there for a year, during which time Daniel would be a Fellow at the Mandel Institute in Jerusalem. This was a euphoric time in Israel. The economy was booming, and peace seemed virtually guaranteed. A few months into their stay, Gordis and his wife decided to remain in Israel permanently, confident that their children would be among the first generation of Israelis to grow up in peace.

Immediately after arriving in Israel, Daniel had started sending out e-mails about his and his family’s life to friends and family abroad. These missives—passionate, thoughtful, beautifully written, and informative—began reaching a much broader readership than he’d ever envisioned, eventually being excerpted in The New York Times Magazine to much acclaim. An edited and finely crafted collection of his original e-mails, If a Place Can Make You Cry is a first-person, immediate account of Israel’s post-Oslo meltdown that
cuts through the rhetoric and stridency of most dispatches from that country or from the international media.

Above all, Gordis tells the story of a family that must cope with the sudden realization that they took their children from a serene and secure neighborhood in Los Angeles to an Israel not at peace but mired in war. This is the chronicle of a loss of innocence—the innocence of Daniel and his wife, and of their children. Ultimately, through Gordis’s eyes, Israel, with all its beauty, madness, violence, and history, comes to life in a way we’ve never quite seen before.

Daniel Gordis captures as no one has the years leading up to what every Israeli dreaded: on April 1, 2002, Prime Minister Ariel Sharon declared that Israel was at war. After an almost endless cycle of suicide bombings and harsh retaliation, any remaining chance for peace had seemingly died.

If a Place Can Make You Cry is the story of a time in which peace gave way to war, when childhood innocence evaporated in the heat of hatred, when it became difficult even to hope. Like countless other Israeli parents, Gordis and his wife struggled to make their children’s lives manageable and meaningful, despite it all. This is a book about what their children gained, what they lost, and how, in the midst of everything, a whole family learned time and again what really matters.