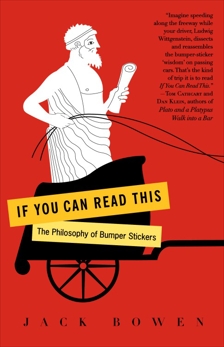 If You Can Read This: The Philosophy of Bumper Stickers

Synopsis: A PICTURE MAY BE WORTH A THOUSAND WORDS—
BUT A FEW CHOICE WORDS CAN SPEAK VOLUMES!

• If Ignorance Is Bliss, Why Aren’t More People Happy?
• Bottled Water Is for Suckers
• Clones Are People Too
• At Least the War on the Environment Is Going Well
• Don’t Believe Everything You Think
• The Revolution Will Be Tweeted

Long before blogs, tweets, and sound bites, people were telling the world how they felt in brief, blunt bursts of information plastered on the backs of their cars. Whether they’re political or religious, passionate or proud, controversial or corny, these brightly colored, boldly lettered mini manifestos are declarations of who we are, where we stand, and what we’d rather be doing. But as bestselling author and noted philosopher Jack Bowen reveals, there’s much more to the pop-culture phenomenon of bumper stickers than rolling one-liners and drive-by propaganda—no less, in fact, than a wise, funny, poignant, contentious, and truthful discourse on the human condition.

Mixing pop culture with the ideas of historically prominent philosophers and scientists, If You Can Read This exposes the deeper wisdom couched behind these slogans—or, as need be, exposes where they have gone wrong. If you brake for big ideas, now’s the time.