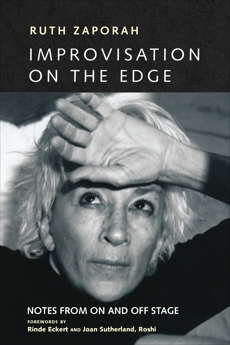 Improvisation On the Edge: Notes from On and Off Stage

Synopsis: Directed not only toward actors, dancers, and other performing artists who draw upon improvisation as part of their craft, this Zen-infused memoir of a life lived creatively will pique the interest of anyone in search of liberation from self-limiting concepts. What does it mean to live in a body? What does it mean to improvise? Do we wonder whether we're capable of improvising—to make up things as we go, step into the unknown, take a risk that changes our notion of ourselves and the world?

Author Ruth Zaporah has been a professional physical theater performer, writer, director, and teacher for forty years. Early on she realized that with a shift of perception, every moment of an improvisation holds both the familiar and the utterly new. With the same shift, so does every moment of life; every moment holds both the known and the unknown. And, as Zaporah says, "The body leads the way in this book. In each chapter the world is experienced by it and of it. It is the body that adds richness, wildness, and grace. The body invokes images and feelings. It is the body that imagines."

Improvisation on the Edge recounts events from Zaporah's life such as improvisational shows in the war zones of Sarajevo and Kosovo; apprenticing with a Huichol medicine woman from Chiapas, Mexico; understanding the concept of "practice" while on a beach; a bus ride in Cuba; a car ride in Estonia; the intricacies of onstage collaborations. Interspersed are chapters about awareness, listening, adapting, resiliency, time, space, silence, simplicity—all within the context of everyday life in the body. In several other chapters, Ruth writes from the logical (and nonlinear) voice of the improviser as she is on stage, within the immediate embodied process. A fascinating glimpse into the mind of an artist and true master of improvisation, this book will appeal to performers, teachers, and anyone who has ever needed to "wing it" with confidence and grace.