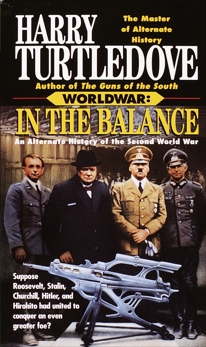 In the Balance (Worldwar, Book One)

Synopsis: Suppose Roosevelt, Stalin, Churchill, Hitler, and Hirohito had united to conquer an even greater foe?

No one could top their power—not the Germans, not the Japanese, not the Russians, not the United States.

From Pearl Harbor to panzers rolling through Paris to the Siege of Leningrad and the Battle of Midway, war seethed across the planet as flames of destruction rose higher and hotter.

And then, suddenly, the real enemy came.

The invaders seemed unstoppable, their technology far beyond human reach. And never before had men been more divided. For Jew to unite with Nazi, American with Japanese, and Russian with German was unthinkable.

But the alternative was even worse.

As the fate of the world hung in the balance, slowly, painfully, humankind took up the shocking challenge. . . .