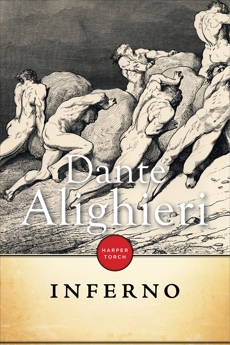 With the Roman poet Virgil as his guide, Dante passes through the nine circles of hell to salvation. As the two make their descent through the underworld, the severity of sin being punished increases, such that those in the ninth and deepest pit—the traitors—are encased in ice for eternity. At the centre of Hell, frozen to the waist and beating his wings in torment, is Satan, the one who would have overthrown God.

Inferno is the first part of the Divine Comedy, the epic narrative poem by the medieval Italian poet Dante Alighieri. Dante’s examination of the afterlife is continued in the remaining two parts of the Comedy, Purgatorio and Paradiso. A masterpiece of world literature, Inferno is a political and spiritual allegory, as well as an exquisite and elaborate imagining of the afterlife and the shape of divine justice.