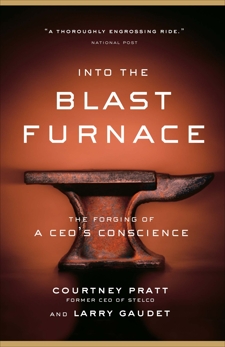 Into the Blast Furnace: The Forging of a CEO's Conscience

Synopsis: From one of Canada’s top CEOs, a heartfelt invitation to reimagine the business world as a place in which conscience and empathy count.

Steel manufacturer Stelco Inc. went into bankruptcy protection in early 2004. There was a lot at stake during the company’s gruelling court-mandated restructuring: 6,000 jobs, 10,000 pensions; the struggling economy of a company town; and the egos and pocketbooks of lawyers, investors, union leaders, politicians and hedge fund managers, each with a special interest to flog and no interest in compromise.

Also on the line was the reputation–and conscience–of CEO Courtney Pratt, who was hired to clean up the mess. To Pratt, survival for Stelco meant attempting to keep the company alive as he ethically reconciled the competing interests, a task made absurdly difficult by the circus-like atmosphere that reigned among those fighting over its future. But at what cost?

To answer that question, Pratt has joined forces with novelist and non-fiction writer Larry Gaudet in a collaboration the two almost jokingly call “magic corporate realism.” Their book provides a thoughtful challenge to the very tired notion that, in the age of Enron and Worldcom, all CEOs are incubated for the sole purpose of looking after their own selfish interests. Pratt’s story, told with imagination, honesty and wit, is about a more important challenge: how to stay human in a bottom-line world.