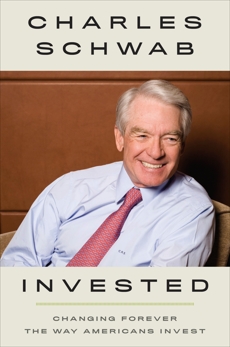 Synopsis: “To say Charles Schwab is an entrepreneur is actually an understatement. He really is a revolutionary.”—Phil Knight, co-founder of Nike, author of Shoe Dog

The founder of The Charles Schwab Corporation recounts his ups and downs as he made stock investing, once the expensive and clubby reserve of the few, accessible to ordinary Americans.

In this deeply personal memoir, Schwab describes his passion to have Main Street participate in the growing economy as investors and owners, not only earners. Schwab opens up about his dyslexia and how he worked around and ultimately embraced it, and about the challenges he faced while starting his fledgling company in the 1970s. A year into his grand experiment in discounted stock trading, living in a small apartment in Sausalito with his wife, Helen, and new baby, he carried a six-figure debt and a pocketful of personal loans. As it turned out, customers flocked to Schwab, leaving his small team scrambling with scarce resources and no road map to manage the company’s growth.

He recounts the company’s game-changing sale to Bank of America—and how, in the end, the merger almost doomed his organization. We learn about the clever and timely leveraged buyout he crafted to regain independence; the crushing stock market collapse of 1987, just weeks after the company had gone public; the dot-com meltdown of 2000 and its reverberating aftermath of economic stagnation, layoffs, and the company’s eventual reinvention; and how the company’s focus on managing risk protected it and its clients during the financial crisis in 2008, propelling its growth.

A remarkable story of a company succeeding by challenging norms and conventions through decades of change, Invested also offers unique insights and lifelong principles for readers—the values that Schwab has lived and worked by that have made him one of the most successful entrepreneurs of our time. Today, his eponymous company is one of the leading financial services firms in the world.

“This is a fascinating story that teaches you about the never-ending evolution of an entrepreneurial company, but even more about personal learning from that experience. So read, learn how to learn from experience, and enjoy.”—George P. Shultz, former secretary of Labor, Treasury, and State