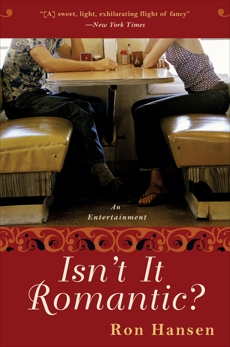 Isn't It Romantic?: An Entertainment

Once again, acclaimed novelist Ron Hansen demonstrates his masterful versatility as a writer, with Isn't It Romantic?, a screwball comedy in the tradition of filmmaker Preston Sturges. In this charming entertainment, mistaken identities, botched schemes, and hilarious misunderstandings all play a part as Parisian sophistication collides with the affability and simple pleasures of the Great Plains.

Touring America was Natalie's idea. But she had not planned on being accompanied on a cross-country bus by her playboy fiancé, Pierre. Nor had they anticipated being stranded in Seldom, Nebraska, population 395.

But that is exactly what happens to this French couple, and they quickly find themselves being taken in by the obliging citizens of Seldom: Natalie by Mrs. Christiansen, a retired high school teacher who runs a rooming house for women, and Pierre by Owen, a gas station owner and ambitious winemaker in an unlikely part of the world.

And here also, the separated couple become enchanted by the locals. Natalie is soon being wooed by Dick Tupper, a handsome and honest rancher with a rambling farmhouse and lots of wide open space. Pierre falls quickly for Iona, a beautiful, no-nonsense waitress in the local diner.

Soon everyone is hatching plots to get what they want: Owen needs help from Pierre's world-class wine business if he is ever going to sell his Nebraska vintage; Pierre wants Iona; Natalie thinks she wants Dick Tupper, but maybe it's Dick who wants Iona, and Natalie who wants Pierre? The fun and surprises are many in this playful romance.