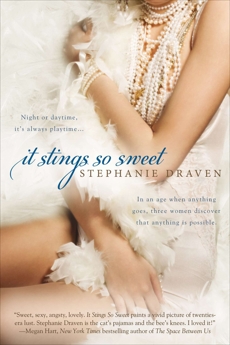 It Stings So Sweet

Synopsis: Fifty Shades of Grey Meets The Great Gatsby in this electrifying novel that vibrates with the hot rhythm of incendiary jazz and teems with wild sexual abandon.

The Twenties were roaring and the women—young, open, rebellious, and willing—set the pace and pushed the limits with every man they met…

In the aftermath of a wild, liquor-soaked party, three women from very different social classes are about to live out their forbidden desires.

Society girl, Nora Richardson's passionate nature has always been a challenge to her ever-patient husband. Now he wants out of the marriage and she has just this one night to win him back. The catch? He wants to punish her for her bad behavior. Nora is offended by her husband's increasingly depraved demands, but as the night unfolds, she discovers her own true nature and that the line between pain and pleasure is very thin indeed.

Meanwhile, Clara Cartwright, sultry siren of the silent screen, is introduced to a mysterious WWI Flying Ace. If Clara, darling of the scandal sheets, knows anything, it’s men. And she’s known plenty. But none of them push her boundaries like the aviator, who lures her into a ménage with a stranger in a darkened cinema then steals her jaded heart.

Working class girl Sophie O'Brien has more important things on her mind than pleasures of the flesh. But when her playboy boss, the wealthy heir to the Aster family fortune, confronts her with her diary of secret sex fantasies, she could die of shame. To her surprise, he doesn't fire her; instead, he dares her to re-enact her boldest fantasies and Sophie is utterly seduced.

One party serves as a catalyst of sexual awakening. And in an age when anything goes, three women discover that anything is possible…