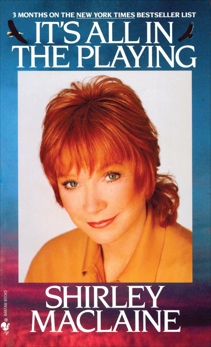 It's All In The Playing

Synopsis: The fifth volume in one of the most extraordinary  personal odysseys of the twentieth century.  Don't Fall Off the Mountain,  You Can Get There From Here, Out on a Limb, Dancing in the Light and now the most intimate and compelling  book of all, It's All in the Playing. Oscar-winning actress, social activist, singular  entertainer, best-selling author Shirley MacLaine  has the courage to be both candid and  controversial. In this book, she casts herself in her most  challenging role yet--as seeker of personal and  metaphysical truth. It began in Peru ten years ago and  ended in Peru ten years later. But the steps along  the way were the real story. In filming the  miniseries Out on a Limb,  Shirley MacLaine was forced to recreate herself ten  years earlier. to journey back from Malibu to London,  from Sweden to the mysterious landscape of Peru...  to the places, the perceptions and profound  emotions she experienced then. And to journey beyond,  exploring new personal and cosmic dimensions, the  choices of her lifetimes, who she was and who she  would become. As the heart of Shirley MacLaine's  testament is a compelling challenge: we choose our  own destinies, create our own illusions. We have the  power to design the world in which we live, and  the strength to remake ourselves in the image of our  dreams.