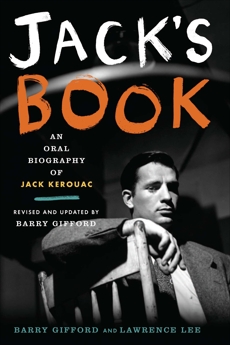 "A fascinating literary and historical document, the most insightful look at the Beat Generation." —Dan Wakefield, author of New York in the Fifties and Going All the Way

First published in 1978, Jack's Book gives us an intimate look into the life and times of the "King of the Beats." Through the words of the close friends, lovers, artists, and drinking buddies who survived him, writers Barry Gifford and Lawrence Lee recount Jack Kerouac's story, from his childhood in Lowell, Massachusetts, to his tragic end in Florida at the age of forty-seven. Including anecdotes from an eclectic list of well-known figures such as Allen Ginsberg, William S. Burroughs, and Gore Vidal, as well as Kerouac's ordinary acquaintances, this groundbreaking oral biography—the first of its kind—presents us with a remarkably insightful portrait of an American legend and the spirit of a generation.