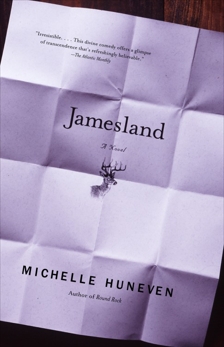 Synopsis: Jamesland, the buoyant second novel by Michelle Huneven, critically acclaimed author of Round Rock, is a witty, sophisticated, and deeply humane comedy of unlikely redemption.

When thirty-three-year-old Alice Black discovers a deer in her dining room after fighting with her boyfriend, she wonders if she’s going crazy. Pete Ross, forty-six, knows he’s crazy. He’s wrecked his marriage, slashed his wrists, and done time in a psychiatric institution, and now he's being cared for by his mother, who’s a nun. Forty-five-year-old Helen Harland, a spirited Unitarian Universalist minister, is being driven crazy by her hostile church administration. Living in Los Feliz, California, the three meet at Helen’s Wednesday midweek services. Though initially incompatible, the sheer force of Helen’s idiosyncratic ministering (her “variety show of religious experience”)–paired with Alice’s illustrious ancestor William James–proves to be a catalyst for friendship and a kind of transcendence. Generous and compassionate, Michelle Huneven delivers a joyful new novel about love, faith, and a few wayward souls waiting for life to begin.