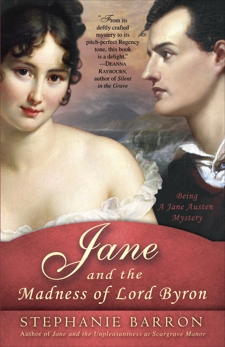 Jane and the Madness of Lord Byron: Being A Jane Austen Mystery

Synopsis: The restorative power of the ocean brings Jane Austen and her beloved brother Henry, to Brighton after Henry’s wife is lost to a long illness. But the crowded, glittering resort is far from peaceful, especially when the lifeless body of a beautiful young society miss is discovered in the bedchamber of none other than George Gordon—otherwise known as Lord Byron. As a poet and a seducer of women, Byron has carved out a shocking reputation for himself—but no one would ever accuse him of being capable of murder. Now it falls to Jane to pursue this puzzling investigation and discover just how “mad, bad, and dangerous to know” Byron truly is. And she must do so without falling victim to the charming versifier’s legendary charisma, lest she, too, become a cautionary example for the ages.