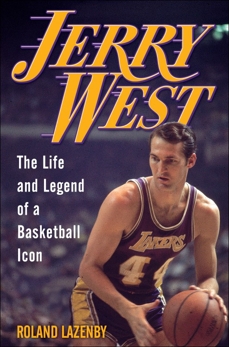 Jerry West: The Life and Legend of a Basketball Icon

Synopsis: When in 1969 the NBA sought an emblem for the league, one man was chosen above all as the icon of his sport: Jerry West. Silhouetted in white against a red-and-blue backdrop, West’s signature gait and left-handed dribble are still the NBA logo, seen on merchandise around the world.

In this marvelous book—the first biography of the basketball legend—award-winning reporter and author Roland Lazenby traces Jerry West’s brilliant career from the coalfields near Cabin Creek, West Virginia, to the bare-knuckled pre-expansion era of the NBA, from the Lakers’ Riley-Magic-Kareem Showtime era to Jackson–Kobe–Shaq teams of the early twenty-first century, and beyond.

But fame was not all glory.

Called “Mr. Clutch,” West was an incomparable talent—flawless on defense, possessing unmatched court vision, and the perfect jumper, unstoppable when the game was on the line. Beloved and respected by fans and fellow players alike, West was the centerpiece of Lakers teams that starred such players as Elgin Baylor and Wilt Chamberlain, and he went on to nine NBA Finals. Yet in losing eight of those series, including six in a row to the detested Boston Celtics, West became as famous for his failures as for his triumphs. And that notoriety cast long shadows over West’s life on and off the court.

Yet as the author discovered through scores of exclusive interviews with West’s teammates, colleagues, and family members, West channeled the frustration of his darkest moments into a driving force that propelled his years as an executive. And in this capacity, the success that often eluded West on the court has enabled him to reach out to successive generations of players to enrich and shape the sport in immeasurable ways.

Though sometimes overshadowed by flashier peers on the court, Jerry West nevertheless stands out as the heart and soul of a league that, in fifty years, has metamorphosed from a regional sideshow into a global phenomenon. And in Jerry West, Roland Lazenby provides the ultimate story of a man who has done more to shape basketball than anyone on the planet.