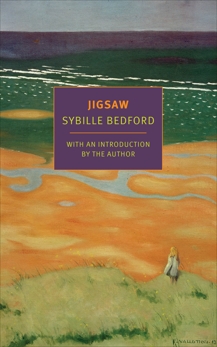 Synopsis: Shortlisted for the Booker Prize, Bedford's autobiographical novel paints a vivid picture of life in 1920s Europe between the wars.

Sybille Bedford placed the ambiguous and inescapable stuff of her own life at the center of her fiction, and in Jigsaw—her fourth and final novel, which was shortlisted for the 1989 Booker Prize—she did it with particular artistry. “What I had in mind,” she was later to say, “was to build a novel out of the events and people who had made up, and marked, my early youth...Truth here was an artistic, not moral, requirement...It involved...writing about myself, my feelings, my actions.” And so she assembled the puzzle pieces of her singular past into a picture of her “unsentimental education.” We learn of a childhood spent alone with her father, “a stranded man of the world” living a life of “ungenteel poverty in quite grand surroundings,” a château, that is, deep in the German countryside, with wine but little else for him and his young daughter to hold body and soul together. We learn of her return to Italy and her mother, “the one character I wished to keep minor and knew all along that it could not be done,” and the dark secret consuming her mother’s life. Finally, she tells us how she lived with and learned from Aldous and Maria Huxley on the French Riviera, developing the sense of purpose and determination that made her the great writer she would become.