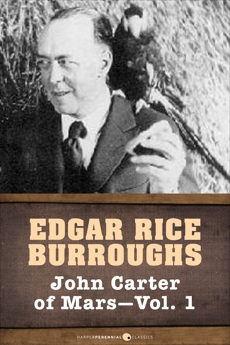 Travel to Mars, known by its inhabitants as Barsoom, with heroic adventurer John Carter in the first three novels of Edgar Rice Burroughs' classic science fiction series. In A Princess of Mars join John Carter on his first visit to the planet Barsoom where he joins the nomadic tribe the Tharks, wins the hand of the beautiful Dejah Thoris, and becomes the Prince of Helium. Carter returns to Barsoom in The Gods of Mars where he must find a way to return from the Valley Dor, the Barsoomian afterlife. In The Warlord of Mars John Carter fights to free his wife, Dejah Thoris from the goddess Issus and in so doing becomes Warlord of Barsoom.