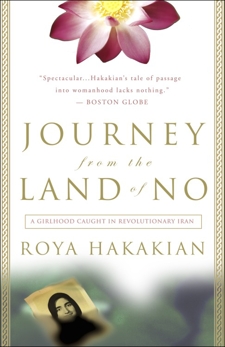 Journey from the Land of No: A Girlhood Caught in Revolutionary Iran

Synopsis: “We stormed every classroom, inscribed our slogans on the blackboard . . . Never had mayhem brought more peace. All our lives we had been taught the virtues of behaving, and now we were discovering the importance of misbehaving. Too much fear had tainted our days. Too many afternoons had passed in silence, listening to a fanatic’s diatribes. We were rebelling because we were not evil, we had not sinned, and we knew nothing of the apocalypse. . . . This was 1979, the year that showed us we could make our own destinies. We were rebelling because rebelling was all we could do to quell the rage in our teenage veins. Together as girls we found the courage we had been told was not in us.”

In Journey from the Land of No Roya Hakakian recalls her childhood and adolescence in prerevolutionary Iran with candor and verve. The result is a beautifully written coming-of-age story about one deeply intelligent and perceptive girl’s attempt to ﬁnd an authentic voice of her own at a time of cultural closing and repression. Remarkably, she manages to re-create
a time and place dominated by religious fanaticism, violence, and fear with an open heart and often with great humor.

Hakakian was twelve years old in 1979 when the revolution swept through Tehran. The daughter of an esteemed poet, she grew up in a household that hummed with intellectual life. Family gatherings were punctuated by witty, satirical exchanges and spontaneous recitations of poetry. But the Hakakians were also part of the very small Jewish population in Iran who witnessed the iron fist of the Islamic fundamentalists increasingly tightening its grip. It is with the innocent confusion of youth that Roya describes her discovery of a swastika—“a plus sign gone awry, a dark reptile with four hungry claws”—painted on the wall near her home. As a schoolgirl she watched as friends accused of reading blasphemous books were escorted from class by Islamic Society guards, never to return. Only much later did Roya learn that she was spared a similar fate because her teacher admired her writing.

Hakakian relates in the most poignant, and at times painful, ways what life was like for women after the country fell into the hands of Islamic fundamentalists who had declared an insidious war against them, but we see it all through the eyes of a strong, youthful optimist who somehow came up in the world believing that she was different, knowing she was special. At her loneliest, Roya discovers the consolations of writing while sitting on the rooftop of her house late at night. There, “pen in hand, I led my own chorus of words, with a melody of my own making.” And she discovers the craft that would ultimately enable her to find her own voice and become her own person.

A wonderfully evocative story, Journey from the Land of No reveals an Iran most readers have not encountered and marks the debut of a stunning new talent.