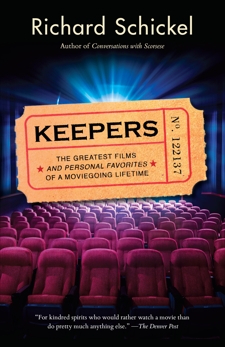 Synopsis: From a legendary film critic and movie fan extraordinaire, the highlights reel of a life spent at the movies

Richard Schickel has seen, by his own estimate, more than twenty thousand films. He has been a reviewer since 1965 (long for Time magazine), has written almost forty books on the subject, and has produced and directed thirty documentaries. He has counted as personal friends many of the leading filmmakers of the twentieth century. Call it “obsession,” “lunacy,” or a “grand passion” (Schickel grants all three), but there’s simply no one who knows film better. Now Schickel gives us the ultimate summing up: a history of film as he’s seen—and lived—it, a tour of his favorites, a master class in what makes a film soar or flop.

Schickel’s no-holds-barred, often raucously irreverent opinions can range from panning classics, to spotlighting forgotten treasures, to defending the art of “popular” genres such as horror, westerns, screwball comedy, and noir. Beyond his picks and pans, Schickel offers a wealth of behind-the-scenes anecdotes (a love note from Marlene Dietrich, Frank Capra’s unlikely path to success, Annie Hall’s original title), career studies of our greatest performers and auteurs, and candidly intimate glimpses of his own life in pictures (an evening with Greta Garbo, John Ford’s advice on directing, a “dust-up” in defense of Monty Python).

Above all, Schickel gives us a collection of the true gems, the immortal moments that have stuck with him over a lifetime of movie watching—the transcendent scenes, characters, lines, shots, scores, even lighting cues that offer, each in their way, pure “movie magic.” Buster Keaton, His Girl Friday, Ingrid Bergman, Taxi Driver, Star Wars, Stanley Kubrick, Pulp Fiction—Schickel reveals all the films and the forces behind them that have kept him coming back for more.
An essential addition to any cinephile’s library, Keepers is the curation of a brilliant connoisseur and critic, but more than that, it’s a love letter to film from one of its most dedicated devotees.