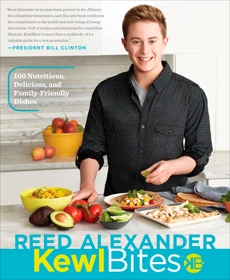 Synopsis: As a busy teen star, Reed Alexander's life is a balancing act. Several years ago, as he juggled career commitments and school, he lost sight of how to eat right, became overweight, and as a result, was exhausted and lethargic. Too tired to keep up with his hectic schedule, he decided to reclaim his health by changing his diet. A can-do guy, his first step was to learn how to cook for himself. Unable to find any recipes suited to a teenager's tastes, he rolled up his sleeves and set to work in his kitchen, developing healthy versions of the foods he loves. Along the way, he became a dedicated cook, sharing his culinary discoveries with his fans and friends on his website, KewlBites.com.

Since then, Alexander has gained a cultlike following of both teen cooks and their parents. Inspired by the number of lives he has touched, Alexander has created 100 slimmed down, kid-tested, mother-approved alternatives for the foods teens love. In KewlBites, Reed Alexaner improves the health profile of such standard teen fare as sliders, chips, chicken fingers, tacos and fries, and he aims to expand the dinner menu to include such dishes as a Margherita Frittata, Oriental Chop Slaw, and Kewl and Breezy Shrimp Rolls. Throughout, he shares the tips, tricks, and methods he used to strip his favorite dishes of their unhealthy ingredients and replace them with flavorful, nourishing ones. He also offers up advice on how to make a shopping list, navigate the grocery store, and choose the freshest ingredients possible.