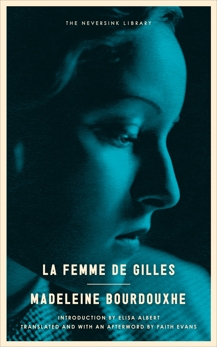 Synopsis: "A haunting, slim novel which has the mesmeric inevitability of a classical tragedy." --Independent on Sunday

La Femme de Gilles tells the story of a fatal love triangle—written on the eve of World War II.

Set among the dusty lanes and rolling valleys of rural 1930s Belgium, La Femme de Gilles is the tale of a young mother, Elisa, whose world is overturned when she discovers that her husband, Gilles, has fallen in love with her younger sister, Victorine. Devastated, Elisa unravels.

As controlled as Elena Ferrante's The Days of Abandonment and as propulsive as Jenny Offill's Dept. of Speculation, La Femme de Gilles is a hauntingly contemporary story of desperation and lust and obsession, from an essential early-feminist writer.

Just after her novel was first published in 1937, Madeleine Bourdouxhe disassociated herself from her publisher (which had been taken over by the Nazis) and spent most of World War II in Brussels, actively working for the resistance. Though she continued to write, her work was largely overlooked by history . . . until now.