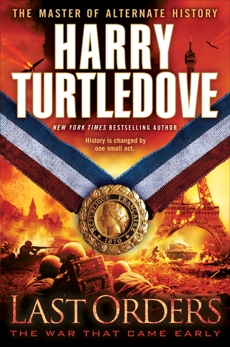 Synopsis: History is changed by one small act.

In an extraordinary saga of nations locked in war, master storyteller Harry Turtledove examines a very different World War II—one which erupts eleven months earlier, and over Czechoslovakia rather than Poland. Now comes the final installment in this landmark series.

Hitler’s Plan A was to win in a hurry, striking hard and deep into France. There was no Plan B. Now the war grinds on. Countries have been forced into strange alliances. The Nazis fortify thin lines with Hungarian and Romanian troops. England, finding its footing after the suspicious death of Winston Churchill and a coup d’état, fights back in Europe and on the seas of the North Atlantic. Jews fight on both sides of the war—in secret in German uniform, openly in Spain, France, and Russia. Into the standoff come new killing tools, from tanks to bazookas. In the Pacific, Japan prepares bombs filled with macabre biological concoctions to be dropped on Hawaii.

For the U.S., the only enemy is Japan, as there has been no casus belli for America in Europe. Then Hitler becomes desperate and declares war on the United States. But is it too late? His own people are rising up in revolt. The German military may have to put down the violence, even perhaps bomb its own cities.

In this epic drama, real men and women are shaped by the carnage, and their individual acts in turn shape history. Drawing on the gritty, personal reality of war and on a cast of unforgettable characters, Harry Turtledove has written an alternate history that intrigues, fascinates, and astounds.

“From our perspective seventy years later, we’re accustomed to thinking of WWII’s outcome as being inevitable. Not so, says [Harry] Turtledove. . . . Disdaining broad brush strokes, Turtledove’s focus on the characters serves to fill out the big picture with patient, nitty-gritty detail. It’s all quite plausible. . . . Armchair warriors will have much to ponder.”—Kirkus Reviews

“Turtledove is the standard-bearer for alternate history.”—USA Today

“This is what alternative history is all about.”—Historical Novel Society

“The Hugo Award winner continues to delight in exploring the world of ‘what if?’”—Library Journal

“Turtledove is always good, but this return to World War II . . . is genuinely brilliant. . . . The characterizations in particular bring the book to extraordinary life.”—Booklist