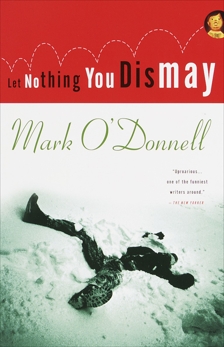 Let Nothing You Dismay

Synopsis: In his brilliant new novel, the first since the widely enjoyed Getting Over Homer, Mark
O'Donnell takes us on a wild and funny tour through the Christmas season's ultimate challenge: the day of too many parties.

It's Christmas Eve Eve Eve Eve Eve in Manhattan--five days from the holiday Ground Zero--but Tad Leary, the most confused man on earth, doesn't know whether to celebrate or go crazy. He's just been fired, he's about to be evicted from his sublet, he's getting nowhere on his overdue folklore thesis, "Social Hierarchies of Imaginary Places," and on top of everything else--or rather underneath everything else--at age thirty-four (older than Christ), he's five-foot-one and still baby-faced, so he's treated like a child wherever he goes. Nonetheless, he's been invited to seven (a magic number one of his rivals is writing a thesis about) different Christmas parties that day, and he decides to explore every one of them for possible work, apartments, love, and just plain distraction.

Tad's a walking punch bowl of joy and fear, goodwill and alienation, running a constant mental argument with himself throughout his long marathon. By midnight, he will have visited all parts of his past--from brunch with his rumpled Boston Irish parents and arguably more successful brothers, to dinner with his beautiful Swedish ex-girlfriend, to a fancy, colossal uptown bash where, by now dangerously looped, he bumps into an ex-boyfriend (more confusion!) looking as "glorious and golden as a roast turkey."

A farcical, over-the-top feast of twisted one-liners and outrageous imagery, Let Nothing You Dismay depicts Tad's--and everyone's--struggle for survival, with a bracing combination of Darwinian theory and hallucinatory fairy-tale wonder. It's a Chekhov story told with P. G. Wodehouse flippancy, or a tale of Celtic mysticism as S. J. Perelman might have rendered it. Above all, the bright spots in this darkest night of the soul prove that comical epiphany isn't just for Christmas anymore.