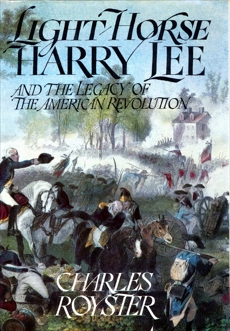 Synopsis: In Light Horse Harry Lee, Charles Royster tells the story of a man whose career embodies the visionary promises that inspired the American Revolution, as well as the inability of the revolutionary generation to put all its ideals into practice.

The man is Henry Lee—soldier (nicknamed “Light-Horse Harry Lee”), statesmen, landowner, historian of the young republic, member of one of the oldest and most eminent families of Virginia—who throughout his life endeavored to realize his dream of a free and prosperous America. Brilliantly examining Lee’s ambitions and achievements, Mr. Royster makes us see how, both during the war and afterward, Lee continually risked himself in the service of his vision and how again and again he failed to win the victories he sought. He shows us Lee as a young officer in the Revolution, fighting valorously and skillfully, earning renown as a patriot and a military genius—but leaving the Continental Army before the war’s end, sickened by the violence of battle and disheartened by his helplessness to mitigate it. After the war, we see Lee determined to play a central role in the new nation’s peaceful growth—serving in Congress and as governor of Virginia, promoting expansion and development through his own private business ventures. And we watch as Lee’s desperate pursuit of wealth and order for America ends tragically: in his political defeat, bankruptcy, and exile from the land he fought to free.

Tracing Lee’s struggles and reverses in his efforts to implement the promises of the Revolution—in his defense of the union, his opposition to Jeffersonian Republicans, his investments in land, his repeated warnings against war—Mr. Royster shows how, in extreme form, Lee exemplified in his strivings the public aspirations of America’s most politically creative era, as well as his generations collective failure to attain its vision of national grandeur and individual happiness. And it is this failure and the resultant disappointment, Mr. Royster argues, that in large part opened the way to disagreements over the nature of the Union,  culminating, finally, in the Civil War—in which the South was led by Light-Horse Harry Lee’s son, Robert E. Lee.