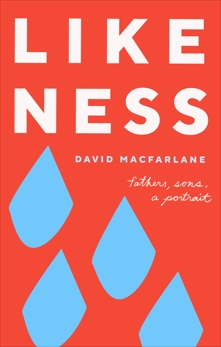 Synopsis: When the worst that can happen, happens, the only useful lesson is the knowledge that it can. That's the take-away: a world can actually end, time can actually run out, sadness can prevail. But I didn't know that then . . .

From one of Canada's most celebrated writers and the author of the classic memoir The Danger Tree comes an occasionally hilarious, sometimes heart-breaking meditation on love, memory, and the fathomless depths of grief.

Likeness is a multi-generational story told through the vehicle of a painting, a portrait of Macfarlane by the well-known Canadian artist, John Hartman. The painting has ended up unexpectedly, temporarily, and enormously in Macfarlane's living room. He looks at it--a lot. It's hard to avoid.

To Macfarlane's surprise, the painting becomes a portal--not only into his own past, but into his father's, too. Through these two histories is woven the present--one dominated by illness. Macfarlane's son undergoes treatment for leukemia during the time the painting hangs in the family living room. Blake is a young man rich in creative possibility. There is music to be composed. There are films to be made. But Blake's future is as circumscribed by fate as his father's was wide open. A tragic difference, eloquently noted.

Likeness can be very funny. But it is also inescapably, achingly sad. A book of transcendent beauty, Likeness demonstrates the power of memory to transform the tragic into the precious and profound.