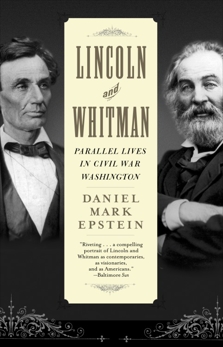 Synopsis: It was more than coincidence—indeed, it was all but fate—that the lives and thoughts of Abraham Lincoln and Walt Whitman should converge during the terrible years of the Civil War. Kindred spirits despite their profound differences in position and circumstance, Lincoln and Whitman shared a vision of the democratic character that sprang from the deepest part of their being. They had read or listened to each other’s words at crucial turning points in their lives. Both were utterly transformed by the tragedy of the war. In this radiant book, poet and biographer Daniel Mark Epstein tracks the parallel lives of these two titans from the day that Lincoln first read Leaves of Grass to the elegy Whitman composed after Lincoln’s assassination in 1865.

Drawing on the rich trove of personal and newspaper accounts, diary records, and lore that has accumulated around both the president and the poet, Epstein structures his double portrait in a series of dramatic, atmospheric scenes. Whitman, though initially skeptical of the Illinois Republican, became enthralled when Lincoln stopped in New York on the way to his first inauguration. During the war years, after Whitman moved to Washington to minister to wounded soldiers, the poet’s devotion to the president developed into a passion bordering on obsession. “Lincoln is particularly my man, and by the same token, I am Lincoln’s man.”

As Epstein shows, the influence and reverence flowed both ways. Lincoln had been deeply immersed in Whitman’s verse when he wrote his incendiary “House Divided” speech, and Whitman remained an influence during the darkest years of the war. But their mutual impact went beyond the intellectual. Epstein brings to life the many friends and contacts his heroes shared—Lincoln’s debonair private secretary John Hay, the fiery abolitionist senator Charles Sumner, the mysterious and possibly dangerous Polish Count Gurowski—as he unfolds the story of their legendary encounters in New York City and especially Washington during the war years.

Blending history, biography, and a deeply informed appreciation of Whitman’s verse and Lincoln’s rhetoric, Epstein has written a masterful and original portrait of two great men and the era they shaped through the vision they held in common.