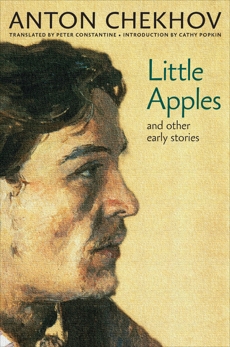 Little Apples: And Other Early Stories

Synopsis: In the follow-up to his National Translation Award-winning collection The Undiscovered Chekhov, translator and scholar Peter Constantine brings us more little-known work from the legendary author's early days as a magazine writer, pseudonymously turning out pieces for Russia's small middle class.  These stories are fresh, yet mature, snapshots of the style with which Chekhov would come to be associated, both uproariously tragic and darkly comic, and lit from within by a deep fellow feeling for all of humanity. As his readers have come expect, Constantine has translated this work with a masterly command of both languages' subtleties, capturing the shadings and intricacies of Chekhov's writing that flash and recede like sunlight on an orchard, offering Chekhov's tough and amused perspectives on daily phenomena like love, aging, class, and work. With moments that seem to presage the most contemporary writing, Chekhov's Little Apples reveals one of the world's greatest writers as we have rarely seen him, an author both deeply of his times and far ahead of them.