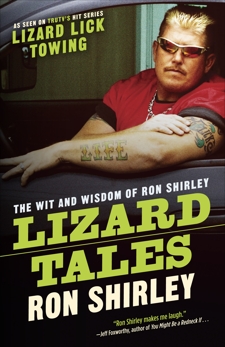 Synopsis: The star of TruTV's hit show, Lizard Lick Towing, shares stories of life as a small-town repo man, as well as the "Ron-isms" and "Ron-osophy" he is known for.

Crazier than a sack of rabid weasels?
Country as cornflakes?
Gooder than grits?
You bet he is!

Week after week, millions of viewers tune in to Lizard Lick Towing to watch Ron Shirley outsmart the fist-swinging, gun-toting folks whose vehicles he’s been hired to repossess. Staring danger in the face, Ron disarms them not with his size or his strength but with his wit—and especially with his trademark funny sayings that have come to be known as “Ronisms.”
In Lizard Tales, Ron takes readers on a side-splitting trip through his wacky, colorful life. Growing up and raising heck in the Carolina countryside—where sushi is still called “bait”—young Ronnie was known to gig frogs, mooch moonshine from his pops, hunt, and cruise the strip in Myrtle Beach. He continues to get himself into hilarious scrapes and jams as an adult by tarring a roof during a lightning storm, inviting an angry deer onto his cousin’s brand-new boat, drinking (and fist-fighting) with a priest, matching wits with his wife, Amy, and running repo with his sidekicks at the towing company. So kick back, help yourself to some ’shine (if you got it), let Ron tell you some stories, and prepare yourself to get licked!