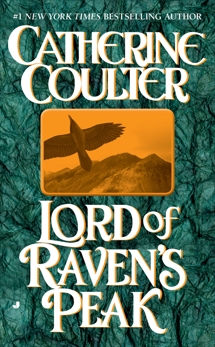 For hundreds of years the Vikings were viewed by the world as vicious plunderers and ruthless savages. But in fact, these fierce people were also great explorers. They were romantic, too; their feats those of heroes, of grit, and of valor. They were strong, proud, loyal—the stuff of legends and of fiction.

Go back to Viking times with the Lord of Raven’s Peak, Merrik Haraldsson. The younger brother of Rorik, the Lord of Hawkfell Island, begins his journey in Kiev where he comes away with two slaves, but they're not who or what he thinks they are—not by a long shot.

Then the question arises: Can a woman be a skald, a troubadour of Viking times? Laren, one of Merrik's slaves, is just that, and she's quite good. She wants to tell stories to earn enough silver and gold to buy her and her little brother from Merrik, only he refuses to sell her. And now that she's his, he must protect her when she's accused of murder, then save her yet again when he discovers her secrets.