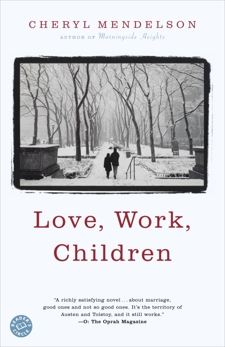 Synopsis: Morningside Heights, a Manhattan neighborhood sandwiched between Columbia University and the Hudson River, is home to an eclectic mix of academics, struggling artists, and rooted families. In this distinctive world, Peter Frankel, a successful partner in a prestigious law firm, lives a seemingly contented life with his talented wife and his two Ivy League—educated children.

Yet in middle age Peter finds himself discontent. His wife’s narrowness and her preoccupation with appearances leaves him cold, his job does not fulfill his creative bent, and he fears that his children, Susan and Louis, have grown into skeptical young adults who shun marriage and stability.

So when Peter’s wife is badly hurt in a car accident and lies in a coma, he finds himself guiltily relieved–and newly drawn toward his children as they too struggle with ambivalent feelings about the mother who’s never really shown them much love. As Susan, a cerebral doctoral student, becomes unhappily involved with an aspiring playwright and Louis is caught up in a futile pursuit of an ambitious journalist, Peter’s own quiet life is shaken up, and longings he has stifled for years come rumbling to the surface.

Freed from his wife’s judgments, Peter throws himself into his greatest pleasure, the work he does for a foundation that funds offbeat artistic projects. And as his passion for this work ignites, so does his desire for another woman. But the stubborn morality that has steered Peter’s life is a force to be reckoned with–and one from which he may never entirely escape.

Love, Work, Children is a profoundly insightful novel about two generations and the colorful urban world they inhabit. A superb portrayal of one of New York’s exceptional neighborhoods, this is a story, ultimately, about the self-imposed obstacles to true happiness–and a testament to the joy one can find in overcoming them.