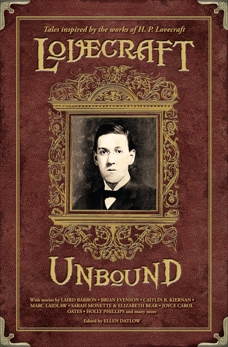 Synopsis: The stories are legendary, the characters unforgettable, the world horrible and disturbing. Howard Phillips Lovecraft may have been a writer for only a short time, but the creations he left behind after his death in 1937 have shaped modern horror more than any other author in the last two centuries: the shambling god Cthulhu, and the other deities of the Elder Things, the Outer Gods, and the Great Old Ones, and Herbert West, Reanimator, a doctor who unlocked the secrets of life and death at a terrible cost. In Lovecraft Unbound, more than twenty of today's most prominent writers of literature and dark fantasy tell stories set in or inspired by the works of H. P. Lovecraft.