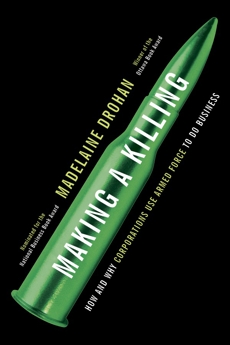 Making a Killing: How and Why Corporations Use Armed Force to Do Business

Synopsis: A dramatic and compelling journey into the dark heart of globalization. What happens when multinational corporations decide that the use of armed force is just business by other means?

In Making a Killing, Madelaine Drohan looks at the shocking number of companies that have linked up with mercenaries, warlords, armies and private militias in order to make a profit. In a world where multinationals often rival national governments in size and clout, the implications of such partnerships are ominous. What leads respectable corporations down the path to violence? Drohan answers this question by examining the actions of several companies operating in Africa, such as Ranger Oil West Africa, which used the mercenary group Executive Outcomes to take on rebels in Angola’s long-running civil war; and Talisman Energy, whose security was provided by Sudanese army units conducting a scorched-earth policy in the oil fields.

Drohan traces the modern roots of corporate armed force, beginning with Cecil Rhodes’ British South Africa Company, which at the turn of the century built its own army. Also included is the stranger-than-fiction tale of ex-MI5 spymaster Sir Percy Sillitoe, who was hired by the De Beers diamond king to prevent the Soviet Union from acquiring smuggled diamonds in order to develop the hydrogen bomb. These accounts read like adventure stories in the tradition of Rudyard Kipling and Ian Fleming, but they are essential reading for anyone interested in the effects of unfettered multinational influence. Making a Killing provides a road map for corporations, policy makers and investors struggling to come to terms with their roles in today’s increasingly globalized world.