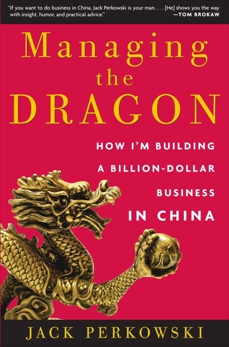 Managing the Dragon: How I'm Building a Billion-Dollar Business in China

Synopsis: The first book by a westerner who built a company in China from scratch

The emergence of China as a world economic power is one of the biggest stories of our time. Every business that intends to be an important part of the fast-changing global economy needs to know how to play the game in China. Who better to be your guide than Jack Perkowski, the pioneer who went to China in the early 1990s. Equipped with just a concept, he built a company step-by-step from the ground up–ASIMCO Technologies–that became a major player in China’s fast-growing automotive business.

Perkowski’s story is as rich, involving, and improbable as those of nineteenth-century titans such as Rockefeller and Carnegie or of twentieth-century ones like Michael Dell and Bill Gates, but with one obvious difference: They and others built their companies when America was emerging or dominant. Perkowski built his at the dawn of the Chinese century.

Perkowski’s insights about the challenges and potential of western involvement in today’s great Chinese expansion–gained on the ground in China itself over the past fifteen years–are of inestimable value and relevance to us all. For instance:

• The good news about China: Everything is possible. The bad news: Nothing is easy.
• To build a business in China, you must develop a local management team–avoiding both former bureaucrats of the state-run enterprises and the country’s new breed of wildcat entrepreneurs.
• You must learn the real reason why China is able to produce goods so cheaply.
• Forget your notions about the Chinese economy being rigidly controlled by Beijing–it is, in fact, highly decentralized and locally driven. As the Chinese say, “The mountains are high and the emperor is far away.”

Perkowski tells his story with clarity, lots of humor, and a gripping sense of adventure. He takes us along on his own version of the Long March, when he visited two factories a day for nine months, hitting every province, going through endless rounds of dinners and the inevitable drinking games, and eating what seemed like every part of every animal. He vividly describes what it’s like to be a westerner living and working in China and the dramatic transformation he’s seen in the country, from a place left behind by the modern world to a place where a new world is being born.

Filled with hard-nosed lessons for anyone with ambitions of breaking into the Chinese market, and a rich source of practical wisdom about the realities of China today, Managing the Dragon answers the questions people ask Perkowski most often about his unique experience, as well as those they never think of asking–but should.