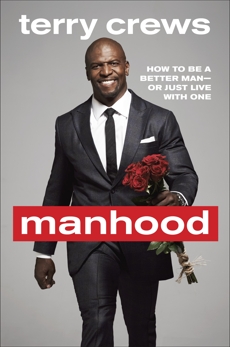 Manhood: How to Be a Better Man-or Just Live with One

What does it mean to be a man? Terry Crews, TV’s iconic “Old Spice Guy” and co-star of the hit Golden Globe Award–winning series Brooklyn Nine-Nine, has spent decades seeking the answer to that question. In Manhood, he shares what he’s learned, telling the amazing story of his rise to fame and offering straight-talking advice for men and the women who love them.

A self-described “super-driven superstar alpha male,” Terry Crews embodies the manly ideal for millions worldwide. But as he looks back on his difficult childhood and shares hard-learned lessons from the many humbling experiences he endured to get where he is today, he shows how his own conception of manhood is constantly evolving.

Crews offers up a lively, clear-eyed account of the ups and downs of his twenty-five-year marriage, revealing the relationship secrets that have kept it going—and the one dark secret that nearly tore it apart. Along the way, he shares his evolving appreciation for looking good, staying fit, and getting it done for the people you love.

Being a man is about more than keeping your core strong. It’s about keeping your core values stronger. With insightful observations on spirituality, work, and family, Terry Crews shows men how to face their inner demons, seek forgiveness from those they’ve wronged, and tear down the walls that prevent them from forging meaningful relationships with others.

From the NFL gridiron to the Hollywood backlot, Terry Crews has survived it all with his sense of humor—and his marriage—intact. In Manhood he shows men everywhere that real strength is not measured in muscle mass—unless that muscle is the heart.