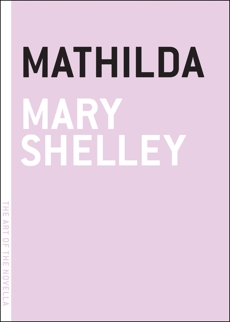 Synopsis: But my father, my beloved and most wretched father... Would he never overcome the fierce passion that now held pitiless dominion over him?

With its shocking theme of father-daughter incest, Mary Shelley’s publisher—her father, known for his own subversive books—not only refused to publish Mathilda, he refused to return her only copy of the manuscript, and the work was never published in her lifetime.

His suppression of this passionate novella is perhaps understandable—unlike her first book, Frankenstein, written a year earlier, Mathilda uses fantasy to study a far more personal reality. It tells the story of a young woman whose mother died in her childbirth—just as Shelly’s own mother died after hers—and whose relationship with her bereaved father becomes sexually charged as he conflates her with his lost wife, while she becomes involved with a handsome poet. Yet despite characters clearly based on herself, her father, and her husband, the narrator’s emotional and relentlessly self-examining voice lifts the story beyond autobiographical resonance into something more transcendent: a driven tale of a brave woman’s search for love, atonement, and redemption.

It took more than a century before the manuscript Mary Shelley gave her father was rediscovered. It is published here as a stand-alone volume for the first time.

The Art of The Novella Series

Too short to be a novel, too long to be a short story, the novella is generally unrecognized by academics and publishers. Nonetheless, it is a form beloved and practiced by literature's greatest writers. In the Art Of The Novella series, Melville House celebrates this renegade art form and its practitioners with titles that are, in many instances, presented in book form for the first time.