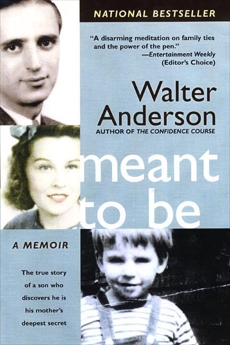 Published to strong reviews and major media attention, this heartfelt and inspirational rags-to-riches memoir by the highly regarded CEO of Parade Publications tells the emotional story of how he came to terms with an identity and a family that he never knew he had until he reached middle age.

Meant To Be begins when Anderson, a 21-year-old Marine returns from service to say goodbye to his dying father and tries to find the answer to a question that has inexplicably haunted him from his earliest years: Was the alcoholic, abusive man who has so tormented him in his childhood his real father? Shockingly, the answer turns out to be "No." Unbeknown to him, at least until that point, his mother, a German Protestant, fell in love during World War II with a Russian Jew and bore his child. Anderson learns this information as a young man but he and his mother keep this secret for another 35 years, until the day Anderson—now an unusually successful publishing executive—meets an unknown brother who, it turns out, has lived a nearly parallel life. Meant To Be is a love story, a journey of self-discovery and spirituality, and a provocative challenge to common notions about the role of heredity in our lives.