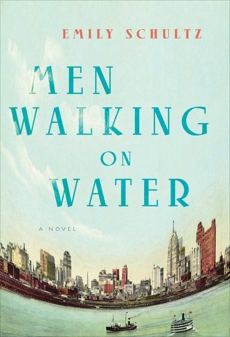 Synopsis: This utterly addictive, brilliant novel about rum-running in the 1920s is like The Wire transplanted to Prohibition-era Detroit, by a writer of whom Stephen King has said: "Emily Schultz is my new hero."


Men Walking on Water opens on a bitter winter's night in 1927, with a motley gang of small-time smugglers huddled on the banks of the Detroit River, peering towards Canada on the opposite side. A catastrophe has just occurred: while driving across the frozen water by moonlight, a decrepit Model T loaded with whisky has broken the ice and gone under--and with it, driver Alfred Moss and a bundle of money. From that defining moment, the novel weaves its startling, enthralling story, with the missing man at its centre, a man who affects all the characters in different ways. In Detroit, a young mother becomes a criminal to pay down the debt her husband, assumed dead, has left behind; a Pentecostal preacher brazenly uses his church to fund his own bootlegging operation even as he lectures against the perils of drink; and across the river, a French-Canadian woman runs her booming brothel business with the permission of the powerful Detroit gangsters who are her patrons.
The looming background to this extraordinary story, as compelling as any character, is the city of Detroit--a place of grand dreams and brutal realities in 1927 as it is today, fuelled by capitalist expansion and by the collapse that follows, sitting on the border between countries, its citizens walking precariously across the river between pleasure and abstinence. This is an absolutely stunning, mature, and compulsively readable novel from one of our most talented and unique writers.