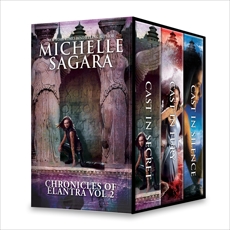 Synopsis: CHRONICLES OF ELANTRA, VOLUME 2
New York Times bestselling author Michelle Sagara sweeps readers away to the fantastical city of Elantra, where magic and adventure ensure that the life of Private Kaylin Neya is never boring.

CAST IN SECRET
Private Kaylin Neya relishes the thought of investigating a regular theft once again…until she finds out the item was stolen from Elani Street, where true mages and charlatans mingle. And since the missing box is ancient, has no keyhole and holds tremendous darkness inside, Kaylin knows unknown forces are once again playing with her destiny—and her life.

CAST IN FURY
When a minority race of telepaths is suspected of causing a near-devastating tidal wave, Private Kaylin Neya is again drawn into a world of politics…and murder. To make matters worse, Marcus, her trusted sergeant, gets stripped of his command, leaving Kaylin vulnerable. Now she's juggling two troubling cases, and her dreaded magic lessons are starting to look good by comparison…

CAST IN SILENCE
Private Kaylin Neya has sacrificed much to earn the respect of the winged Aerians and immortal Barrani she works alongside. But when the city's oracles warn of brewing unrest in the outer fiefdoms, a mysterious visitor from Kaylin's past casts her under a cloud of suspicion.