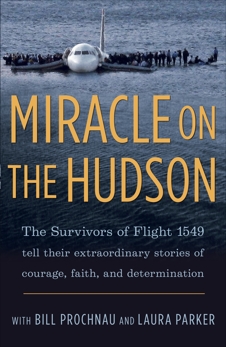 Miracle on the Hudson: The Survivors of Flight 1549 Tell Their Extraordinary Stories of Courage, Faith, and Determination

Synopsis: The remarkable true story of Chesley “Sully” Sullenberger’s heroic crash landing in the Hudson River, as told by the passengers who owe him their lives.

Millions watched the aftermath on television, while others witnessed the event actually happening from the windows of nearby skyscrapers. But only 155 people know firsthand what really happened on U.S. Airways Flight 1549 on January 15, 2009. Now, for the first time, the survivors detail their astounding, terrifying, and inspiring experiences on that freezing winter day in New York City. Written by two esteemed journalists, Miracle on the Hudson is the entire tale from takeoff to bird strike to touchdown to rescue, seen through the eyes and felt in the souls of those on board the fateful flight.

Revealing many new and compelling details, Miracle on the Hudson dramatically evokes the explosion and "smell of burning flesh" as both engines were destroyed by geese, the violent landing on the river that felt like a "huge car wreck," the gridlock in the aisles as the plane filled swiftly with freezing water, and the thrill of the passengers' rescue from the wings and from rafts—all of it recalled by the "cross section of America" on board.

Tracey Wolsko, a nervous flier, suddenly became other people's rock: "Just pray. It's going to be all right." Jim Whitaker, a construction executive, reassured a nervous mother of two young children on board, only later admitting, "I was pathologically lying the whole time." As the plane started sinking, Lucille Palmer, eighty-five, told her daughter to save herself: "Just leave me!"

Featuring much more than what the media reported—moments of chaos in addition to stoicism and common sense, and the fortuitous mistakes and quick instincts that saved lives that otherwise would have been lost—Miracle on the Hudson is the chronicle of one of the most phenomenal feel-good stories of recent years, one that could have been a nightmare and instead became a stirring narrative of heroism and hope for our times.