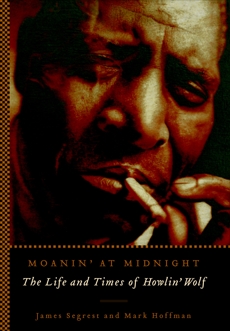 Moanin' at Midnight: The Life and Times of Howlin' Wolf

Synopsis: Howlin’ Wolf was a musical giant in every way. He stood six foot three, weighed almost three hundred pounds, wore size sixteen shoes, and poured out his darkest sorrows onstage in a voice like a raging chainsaw. Half a century after his first hits, his sound still terrifies and inspires.

Born Chester Burnett in 1910, the Wolf survived a grim childhood and hardscrabble youth as a sharecropper in Mississippi. He began his career playing and singing with the first Delta blues stars for two decades in perilous juke joints. He was present at the birth of rock ’n’ roll in Memphis, where Sam Phillips–who also discovered Elvis Presley, Johnny Cash, and Jerry Lee Lewis–called Wolf his “greatest discovery.” He helped develop the sound of electric blues and vied with rival Muddy Waters for the title of king of Chicago blues. He ended his career performing and recording with the world’s most famous rock stars. His passion for music kept him performing–despite devastating physical problems–right up to his death in 1976.

There’s never been a comprehensive biography of the Wolf until now. Moanin’ at Midnight is full of startling information about his mysterious early years, surprising and entertaining stories about his decades at the top, and never-before-seen photographs. It strips away all the myths to reveal–at long last–the real-life triumphs and tragedies of this blues titan.