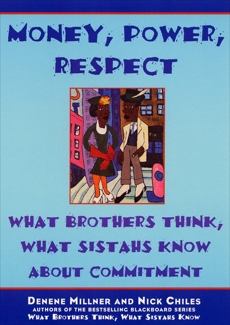 First, In What Brothers Think, What Sistahs Know, the bold and beautiful Denene Milner and Nick Chiles gave the real deal of love and relationships. It was hailed as the African American Men Are from Mars, Women Are from Venus. Then, in What Brothers Think, What Sistahs Know About Sex, the savvy supercouple told African American daters and maters how to get it on and heat it up in the bedroom -- or wherever else couple may find themselves.

Now Nick and Denene have set their sites on three of the hottest topics facing couples today. Money. Can he deal when she makes more? Power. He's at the office 24/7. Where does she get her face-time? Respect. How much of their dirty laundry should both he and she air to their friends? In their inimitable he-said/she-said format and hip approach, Denene and Nick reveal the real deal on what black men and women think about financial issues, power struggles, and the importance of respect. They delve into everything , from whose career is more important to who should punish the kids to who should pay for dinner.

Enlivened by their trademark humor and sassy and bold approach, the message in Money, Power, Respect is crystal clear: While money issues may lead to power struggles, this doesn't have to lead to lack of Respect. In this perspective and insightful guide, Nick and Denene show couples how engaging in fierce, sincere communication will have both partners wearing the pants in the family.