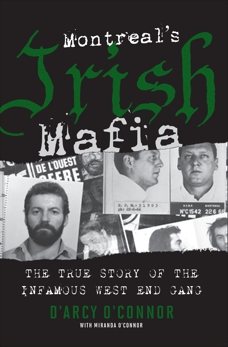 From the early days as hired muscle for the Italian and Jewish mafias, tunnelling into bank vaults in the '50s and '60s, to the legendary truck heists and bank stick-ups in the '70s, Montreal's Irish mafia-otherwise known as the West End Gang-has managed to pull off some of the most daring and complicated robberies and smuggling operations in Canadian history.

Criminals of every stripe inhabit these pages, from violent stick-up men and drug dealers such as the MacAllister Brothers, to "King of the Port" Gerry Matticks and his highly complex importation schemes, as well as the charismatic "King of Coke" Dunie Ryan, his assassin, Paul April, and his successor, Alan "The Weasel" Ross. Through research and interviews with police investigators, convicted gang associates and others, journalist and author D'Arcy O'Connor narrates the genesis and rise to power of one of Montreal's most colourful and violent gangs: Montreal's Irish mafia.