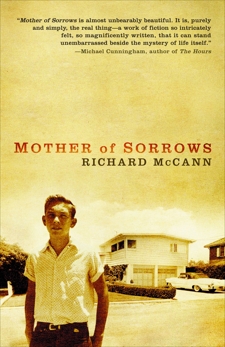 Synopsis: With the breadth and cumulative force of a novel, Mother of Sorrows presents ten interwoven stories of an American family starting out in the post—World War II suburbs of Washington, D.C., a world of identical brick houses and sunstruck, treeless lawns, a world of initial hopefulness from which shame and loss have seemingly been banished. This is the story of two adolescent brothers whose father has suddenly died, and of their beautiful and complicated mother, a mother whom the younger son worshipfully imagines as “Our Mother of the Sighs and Heartaches . . . Our Mother of the Gorgeous Gypsy Earrings . . . Our Mother of the Late Movies and the Cigarettes . . . Our Mother of Sudden Attentiveness . . . Our Mother of Sudden Anger.” This is the brother who narrates these tales as he looks back thirty years later, the only remaining survivor of a world he seeks both to leave behind and to preserve in words forever, a world of sorrow that has held him spellbound even as he has attempted to create a life of his own.

Suffused with the beauty of Richard McCann’s extraordinary language, Mother of Sorrows introduces us to a voice that is urgent, contemplative, elegant, angry, revelatory, and like no other in contemporary fiction.